Buffy the Vampire Slayer is one of the most celebrated genre series of all time. Not only does it still maintain a devoted fandom almost twenty years on, but it has been cited as a major influence on countless other genre classics. From the 21st century version of Doctor Who, to Charmed, to Once Upon A Time, to even non genre series Nikita. They’ve all followed in Buffy’s footsteps in various ways. The show has also been the subject of more essays than any other television series.

Nevertheless one aspect of Buffy that I feel is somewhat overlooked are its horror elements. Critics tend to prefer to focus on the themes of female empowerment, its influence, or the relationship between Buffy and her two Vampire lovers. Angel, and Spike.

Whilst these are valid discussion points, ultimately Buffy was first and foremost a horror series. It was responsible for some of the most terrifying monsters, disturbing concepts and gruesome, visceral scenes of horror ever seen on television. At its best I think Buffy can hold its own with any of classic horror movies.

In this article I’ve decided to compile the most horrific deaths throughout all 7 seasons of Buffy. Please let me know what you think, and if there are any you feel I’ve missed.

Buffy’s cousin Celia is a victim of the demon called Der Kindestod, who can only be seen by people who are ill. Even more disturbing is the fact that Der Kindestod only targets children.

When the monster attacked Celia, Buffy was standing right there, but couldn’t see it and assumed that Celia was simply succumbing to her illness. It’s only years later when Buffy has an encounter with the demon herself in a hospital that she realizes what really happened.

The flashback we are later shown where Celia screams and panics as the invisible monster kills her is definitely one of the shows most terrifying moments. This is what Der Kindestod looks like by the way.

Imagine that thing bearing down on you whilst you are a child, ill and no one else, not even your family who are standing next to you can see it!

The Sunnydale Swim team are infected with a chemical that causes them to mutate into heinous monsters. It’s bad enough becoming a horrible fish man, who has to go and live in the ocean for the rest of your life. The way they change however is even more horrific. The monster they become literally bursts its way from under their skin. 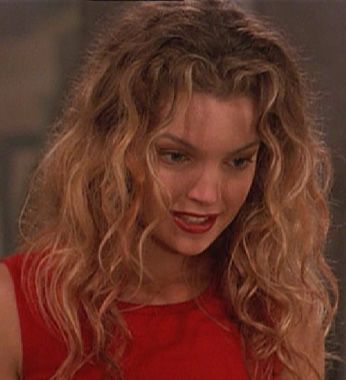 Not quite as creatively horrible as some of the other deaths on this list, it still earns a place for how brutal it is. This unnamed monk is the last survivor of the order of dagon, all of whom one by one are tracked down and killed by Glory, a hell goddess who is searching for the Key. The last of the Monks is tortured throughout the entire episode by Glory, and though Buffy does manage to rescue him. The Monk ultimately succumbs to his wounds not long after. Glory would torture a few other people including Spike for the location of the Key throughout series 5, but none of them died so evidently this poor monk got it the worst.

Unlike the previous victims on this list Catherine brings this on herself (literally, Buffy deflects her own spell back at her). Catherine ends up trapped in her own statue seemingly forever, unable to move or speak. I don’t know whether to class this as a death, as technically Catherine’s mind survives in the statue. Still she’s technically dead, as her body was destroyed. The statue is presumably later destroyed either when the school or Sunnydale are later blown up, so Catherine did later die anyway, but had to spend years trapped in a statue first.

Spike’s death whilst noble and poignant is also pretty horrific when you think about it. The amulet he wears which destroys the Uber Vampires, also slowly burns him to death from the inside out, causing his skin to slowly burn off, his eye balls to melt in their sockets, his organs to explode and his bones to crumble to dust. Worse still Spike is conscious right until the end of it. Though to be fair Spike does relish in the mayhem he causes and unlike the others on this list, Spike’s death didn’t take anyway, as he later returned in season 5 of Angel.

Poor Rickie is a victim of the demon Ken, who captures runaway’s and forces them to work in a hell dimension for the rest of their lives, where they are brutalized and tortured to the point where they don’t even remember who they were. As time runs differently in hell dimensions, 100 years in hell is only 1 day on earth. Rickie is gone for only a few hours on earth before being spat out as an insane, aged old man who dies from the lifetime of abuse he endured.

“You’re gonna die screaming, but you wont be heard”

A legendarily horrible scene from possibly the greatest of all Buffy episodes. The Gentlemen steal everyone in Sunnydale’s voices so that they can attack their victims in their sleep, and cut their hearts out without being heard. (They need 7 for some nefarious scheme that is never revealed.) One unlucky student is cornered by the monsters and has his heart cut out slowly by the grinning monsters, as he hopelessly tries to scream for help.

Caleb played by Nathan Fillion is the recipient of one of the most gruesome and emasculating deaths in the entire history of the series. Fortunately he is the one person who you not only don’t mind it happening to, but you are actually happy for it to happen too!

Caleb is one of the shows nastiest villains. Aside from blinding Xander in one eye, Caleb is also shown to enjoy brutally torturing and murdering young women for fun. His gruesome death at the hands of an iconic female hero like Buffy (who kills him by stabbing him in the balls with an axe and then slicing him up the middle) is therefore probably the least subtle death in the entire history of the show. Still it is nevertheless one of Buffy’s defining moments as both a hero and a feminist icon.

I know what you’re thinking shouldn’t this be number 1? Well as nasty as this is I actually think there is one worse. (Which is really saying something!)

Much like Caleb, Warren is not exactly that sympathetic a character. Having already murdered his girlfriend in cold blood (after having attempted to turn her into his sex slave) and also having murdered fan favourite Tara Maclay. He was probably the best person to give this horrible fate to.

Warren is tortured by a vengeful Willow who strings him up, stitches his mouth together so that he cannot scream, and slowly sticks the bullet into his chest. Later when Warren pathetically begs for his life, Willow grows bored of him and strips the skin from his body, before burning him alive. It is later revealed however in the season 8 comic that Amy, an old witch rival of Willows teleported Warren to safety after Willow flayed him. He did still die however, as The First was able to take his form, so in his later appearances he is technically undead.  Later however when magic is banished from our reality, Amy’s magic, the only thing keeping Warren alive after losing his skin, vanishes and he finally dies from the flaying.

Buffy’s most gruesome death is another flaying, but this is even worse than Warrens. The perpetrator is a Gnarl demon that paralyses its victims with poison in its claws, leaving them unable to move or speak. The Demon then uses its claws to slowly peel the skin from its prey’s bodies piece by piece.

This seems to be a common theme throughout Buffy of being attacked, but being unable to call for help. Buffy’s cousin is attacked by Der Kindestod and no one but her can see it, The Gentleman take away your voices so no one can hear you scream when they tear your heart out, Willow stitches Warren’s mouth up so he can’t scream as she slowly sticks the bullet into his chest, and the Gnarl paralyses its victims to the point where they can’t scream for help.

This is definitely more horrible than the others however. Warren’s flaying whilst vile is at least over in a second, similarly the Gentleman’s victim and Celia’s deaths would have been over much more quickly. This however goes on for hours and added to that the Gnarl looks a lot uglier and nastier than even the Gentlemen or Der Kindestod. Willow ironically very nearly becomes a victim of the Gnarl, but Buffy manages to save her and gives the Gnarl itself a pretty horrible death by putting her fingers through its eyes.

Unfortunately at the start of this episode she is unable to save a young teen from the same fate which is our number 1 most gruesome death in Buffy, (if not anything.)