Throughout its many appearances in film and television over the decades, Tyrannosaurus Rex has been portrayed as the ultimate killer. A towering image of savagery, brutality and raw animal power. It has no equal, no creature can possibly hope to match its devastating strength.

However was this what Tyrannosaurus Rex was actually like? Was it really as bad as the films would have you believe.

The real Tyrannosaurus was far more terrifying than any creature Hollywood could ever spring on us and in this article I will show you just how powerful and deadly the real tyrant lizard king was.

We will start with the primary weapon of the Tyrannosaurus. Its massive mouth. Tyrannosaurus’ jaws were arguably among the most devastating natural weapons ever to exist.

Its teeth were over 9 inches long and very thick and robust. Paleontologist Bob Bakker has said that the teeth of Tyrannosaurus when compared with other meat eating Dinosaurs were like armour piercing bullets. According to Bakke, the teeth of predatory Dinosaurs such as Giganotosaurs were like steak knives, ideal for slicing their way through flesh, but if they hit a bone then they would just snap, where as Tyrannosaurus’ teeth in comparison could crush their way through bone.

The teeth of Tyrannosaurus also curved backwards which made them ideal for holding onto struggling live prey. According to Phil Currie a leading expert on meat eating Dinosaurs, the teeth also had tiny little meat hooks which would have helped to pull more and more meat from its victims, the more they struggled deeper into its throat.

It also agreed that Tyrannosaurus had the strongest bite of any land animal ever to live on the planet, though over the years there have been many different estimate’s given for the full force of a Tyrannosaurus bite.

In 2005 the BBC documentary “The Truth About Killer Dinosaurs” built a complete reconstruction of a Tyrannosaurus head. The reconstruction revealed a number of interesting things. To start with the bite force of a Tyrannosaurus was over 4 tons. This is stronger than any animal alive today. A bite force of 4 tons is also far higher than any other large meat eating Dinosaur including even that of Spinosaurus.

The test also showed that in order to generate such a strong bite, Tyrannosaurus would have needed to have had a skeleton stronger than reinforced steel. The reconstructed Tyrannosaurus head was actually made from steel and powered by hydraulics. It was even nicknamed “Steely Dan”.

If Tyrannosaurus’ skeleton alone was stronger than steel just imagine how powerfully the whole animal would be, when you add the thick muscles that would have anchored those strong bones.

Whilst this documentary was very ground breaking at the time ultimately science marches on and it has since be proven that the tests carried out in this docu were wrong. Tyrannosaurus was in fact far more powerful that this documentary suggested.

Finally an earlier study by Mason B Meers in 2003 meanwhile also came to this conclusion that Tyrannosaurus had a bite force of over 23 tons.

If so this would give Tyrannosaurus the strongest bite force of any animal ever to have lived on the planet, far greater than even the Megalodon Shark which has a bite of 20 tons and over twice that of Deinosuchus a prehistoric crocodile that had a bite force of 11 tons.

Dinosaur George meanwhile famous for his youtube series has said that he believes its bite was even greater than any previous estimate. Whatever the case Tyrannosaurus, even if the lowest estimates were true had a stronger bite than any other large meat eating Dinosaur.

Whilst some may mock Tyrannosaurus’ puny arms, ultimately as you can see with jaws like these Tyrannosaurus really didn’t need them. Even then though Tyrannosaurus actually still had very powerful arms anyway. Each arm could lift about 400 pounds. Still obviously Tyrannosaurus’s main weapon was its huge mouth.

Tyrannosaurus’ senses were highly advanced compared to other Dinosaurs.

Its eyes were positioned at the front of its head with its snout dropping down in front of them. This would have given it steroscopic vision a trait found mostly predatory animals as it allows them to judge long distances. Tyrannosaurus’ eyes were apparently positioned slightly better than those of modern day hawks which meant it would have had even keener vision than they do.

Its eyes were also larger than any other land animal with only the giant Squid and a few species of whales having slightly larger eyes, whilst its sense of smell was just as advanced. Bob Bakker has said that Tyrannosaurus’ sense of smell was comparable to 100 bloodhounds.

Finally in addition to this, its sense of hearing was according to Phil Currie much more refined and could allow the animal to detect lower noises in the ground.

The debate about how fast Tyrannosaurus could run is an old one. It has been depicted as everything from a lumbering behemoth to a fleet footed 9 ton Road Runner from hell!

At one point it was proposed that Tyrannosaurus Rex could have run as fast as 40 miles per hour. In order to do this it would have needed to have had over 80 percent of its body mass in its legs which is completely impossible.

Tyrannosaurus according to the most recent estimates could have only run at a maximum of 18 miles per hour.  Though slower than other large carnivores such as lions and even other Dinosaurs like Allosaurus, this is still for an animal of this size very fast. It’s almost twice as fast as an elephant and about as fast as Rhino. It’s even faster than most human beings and most importantly than the majority of its intended prey species. Furthermore Tyrannosaurus’ stamina and huge body would have allowed it to maintain this speed over a very long period of time, meaning that even if you kept ahead of it at first, in the long run you could not outrun it.

Tyrannosaurus Rex was a very tough animal. It had an incredible pain threshold and great healing capabilities. We know this because many Tyrannosaurus skeletons have been found with gruesome injuries which have healed.

These include broken legs, broken ribs, (even in one case a broken neck!) Bones that have been whacked by Anklyosaur clubs (which could swing with a force of over 4 tones) scratches made by Triceratops horns such as the famous specimen Sue whose leg was punctured by a Triceratops, and even bite marks made by other Tyrannosaurus Rexes.

All of these injuries however have healed. One Tyrannosaurus skeleton even had a bite mark made by another Tyrannosaurus in its brain case that had still healed!

Tyrannosaurus by Dinosaur standards was a very intelligent animal. Its brain was over twice the size of Spinosaurus or Giganotosaurus. It was in fact the most intelligent giant Dinosaur, with the only Dinosaurs in general that were more intelligent than it being the small meat eaters like Stenychosaurus.

In this excellent remake of the 1933 film directed by Peter Jackson, the titular ape takes on 3 Tyrannosaurus Rex’s (actually V-Rex’s, descendants of the Tyrannosaurus.) Now its silly getting worked up over King Kong being inaccurate considering Kong is a complete work of fiction. Still its worth noting that there is one moment where a T. rex or V. rex bites down on Kong’s arm and Kong not only is unaffected but tosses the Tyrannosaurus aside. If that were a real Tyrannosaurus, Kong would have had it. The force of a real Tyrannosaur bite would have crushed his arm, if not taken it clean off. Even if it didn’t then the infection from the bite as well as the blood loss from losing over 500 pounds of flesh from his arm would have been enough to take care of Kong. 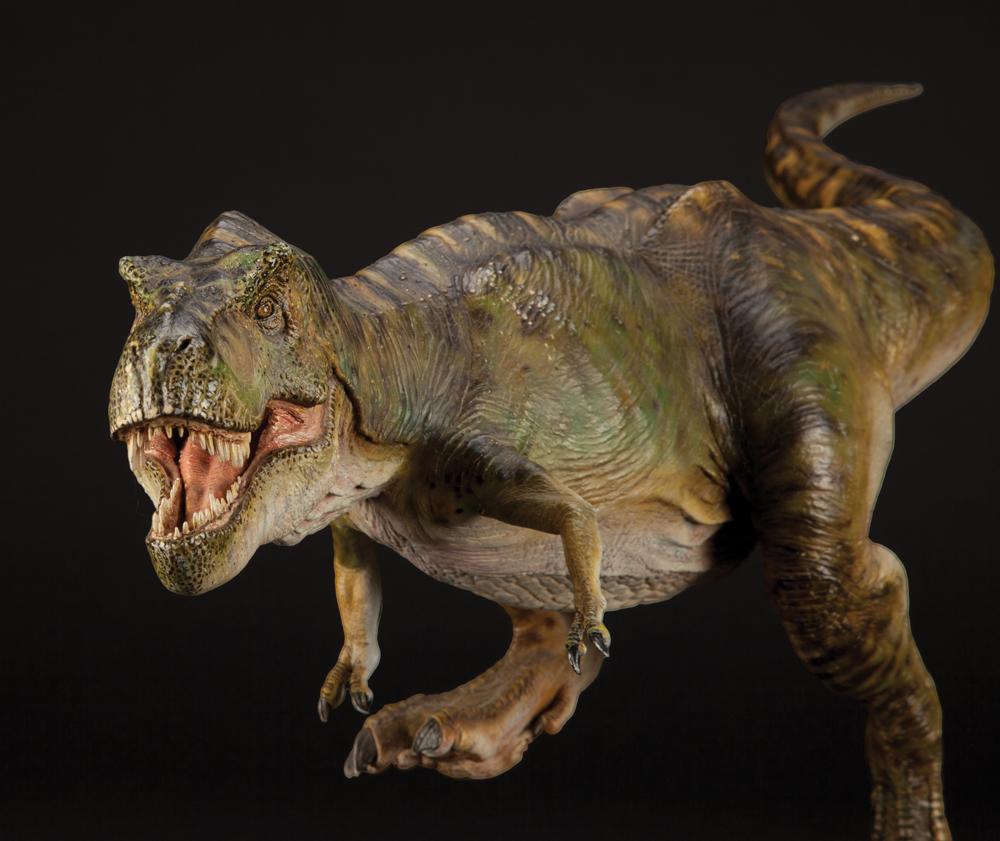 The famous Tyrannosaur, Raptor fight whilst one of, if not the most iconic Dinosaur moment in cinema history still doesn’t do the king of the dinosaurs justice. To start with the Raptors are shown to struggle in the Rex’s jaws for a bit before dying. If it were a real Rex they would be killed instantly, not only due to the force of the Rex’s bite, but also due to the fact that Raptors much like birds had hollow bones. However a bigger inaccuracy is the way the Raptors are able to scar the Rex’s throat. In real life Velociraptors claws were not designed for disembowling and reconstructions have shown that they were not strong enough to pierce even the hide of a crocodile. There is no way they could have scarred a Tyrannosaurus Rex’s skin.

As you can see Tyrannosaurus was by far and away one of the most dangerous creatures ever to live on the planet. It was the perfect combination of strength, speed, and intelligence (by Dinosaur standards). Though it may no longer be the largest meat eating Dinosaur, it is still in terms of strength, intelligence and killing power utterly unrivalled.

2 thoughts on “The Power of Tyrannosaurus Rex”