School of the Damned is a Scottish horror comic published by Black Hearted Press.

It could be described as being something of a cross between Alan Moore’s League of Extraordinary Gentleman and the X-Men.

Written and drawn by John Howard, James Devlin, Dave Alexander, John Farman, Jason Mathis and David Braysher. This series has so far produced six issues as well as its own spin off series, “Tales of the Damned.”

Its easily one of the most inventive and interesting horror comics I’ve had the good fortune to discover in a long while and that’s why I have decided to look at it first in my horror comic reviews series.

I will give an overview of the series, pick out my favourite issue and also say who I would like to see cast in an adaptation of it should it ever happen.

The series is set during the second world war. It revolves around a school similar to Xavier institute for gifted youngsters, except rather than mutants its supernatural creatures it helps, Vampires, Demons, Werewolf’s, Witches, even a Frankenstein Monster named Franken Jenny.

The school attempts to teach these creatures to try and control their Demonic nature’s and use their great powers for the good of humanity and to battle the Nazi’s. 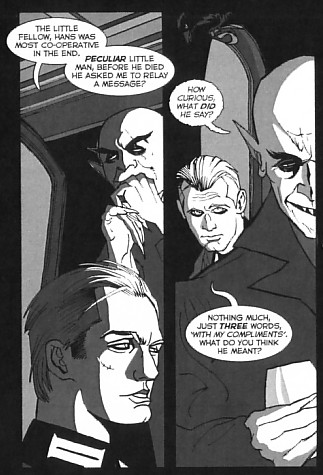 The school is run by a reformed Count Orlok and among its staff include Damien the Demon child from The Omen (who is called Moloch), a Raven named Nevermore, Medusa, Doctor Caligari and Professor Victor Frankenstein.

Aside from battling Nazi’s the school also has to contend with Professor Abraham Van Helsing a deranged Vampire hunter who seeks to exterminate all supernatural creatures regardless of their alignment.

As you can see the series has quite an interesting premise, casting traditionally villainous horror movie characters like Damien as the good guys whilst making Van Helsing into a brutal and sadistic villain.

There are of course shades of the X-Men and League of Extraordinary Gentleman in its premise. Famous film and literary characters fighting Nazi’s, a school for gifted youngsters run by a bald, wise old man. Van Helsing can be seen to fulfil a Striker type of role of the fanatic that wants to exterminate all of the mutant’s/supernatural’s.

Still the strip is able to carve out its own identity enough to be an interesting story in its own right.

All of the characters are fairly fleshed out and interesting and they fulfil their own roles within the story. They are not merely expy’s of other characters, and the writers and artists I feel are able to bring something new to these old iconic characters which is no mean feat.

Its interesting seeing Count Orlok cast as a loving husband who still talks with his deceased wife’s ghost and is desperate to help other supernatural creatures not only use their power for good but also not feel alone like he did.

Professor Victor Frankenstein is also portrayed as arguably the most compassionate figure there meanwhile. Now the professor in all fairness is not usually portrayed as an out and out villain. The Universal version was even cast as a heroic figure whose experiments would have succeeded had it not been for a bumbling assistant Fritz, who was also the one that relentlessly tormented the Monster too when it was chained.

However what’s interesting here is that this version of the Professor is clearly based on Peter Cushing’s performance in the Hammer movies. Cushing’ Frankenstein was an out and out monster, more so than any of the creatures he created.

He was willing to murder and even rape innocent people throughout the course of the 6 films he appeared in.

In School of the Damned however the Cushing Frankenstein is shown to be a deeply caring individual who loves his creation FrankenJenny like a daughter and is appalled at some of the actions of the other members of the staff.

We see this when Clarrisa Van Helsing, a Vampire arrives at the school and the others subject her to an intense interrogation just to make sure she can be trusted much to Frankenstein’s horror who intervenes and demands they stop this inhuman treatment at once.

Again its a great twist to see one of Horror’s vilest villains be such a likable caring character.

You can see how heavily the School of the Damned Frankenstein draws on Cushing’s appearance.

However again these homages don’t weight the stories down to the point where they just feel like pastiche’s of other works.

The stories are very well written with a mix of brilliant action, such as in the first issue where we get to see the likes of Moloch, Orlok and Medusa use their powers to dispatch a squad of Nazi’s.

We are taken deep into the relationships between the students at the school, such as the romance between FrankenJenny and the werewolf Connor or the bitter rivalry between Jean, a Vampire and Connor. It seems Vampires and Werewolves can never get along.

Of all the characters in the school I’d say that FrankenJenny and Clarissa Van Helsing are the most interesting however both of whom are tragic, sympathetic yet engaging figures.

The artwork for the series meanwhile I think is really able to capture the feel of these old classic horror movies that it takes inspiration from. It helps that it is in black and white of course, but still I feel the various artists of the strip are able to conjure up quite a gloomy and strong atmosphere that suits the darker nature of the strip.

Sadly I have been unable to collect all 6 issues so far or any of the spin off series yet. The series is hard to get hold of. I am not even sure if its available in shops outside of Scotland. You’re best bet is to try and order it online which you can do from its official wix website. Sadly the first two issues have been sold out, but a trade paperback that collects the first 6 issues is scheduled for release sometime soon.

I hope the creators continue with the series as whilst its early days yet I think they have the potential to make this really special.

Behind Blue Eyes is the third issue of School of the Damned and so far of the issues I have had a chance to read it is by far my favourite.

Its plot sees Clarissa Van Helsing arrive at the school asking for help. Naturally Orlock and the others are mistrustful of her and interrogate her about her past.

We see through flashbacks how Clarissa had a strained relationship with her father legendary Vampire hunter Abraham Van Helsing who used to regularly beat her mother. L

Things became so bad that she eventually left and encountered a dying Dracula. As a punishment to his archenemy Dracula sired her. As a Vampire she ended up fleeing her murderous father and eventually ended up with another young woman whom she made into a Vampire. The two became lovers and after many years together hunting and killing Clarissa overcome with guilt burned her lover to death to free her from the curse. Unable to finish her own life she eventually ended up in the School.

I love this story as I think its such a clever inversion of the old Hammer Dracula’s. In the original Hammer Dracula’s we would always see how Dracula would try and punish his enemies by turning someone they loved into a Vampire, always a young woman.

Here we see a similar idea, but its turned completely on its head in so many ways. First of all we focus completely on Clarissa. Both Dracula and Van Helsing are actually hardly in this story. Instead we get to see how Clarissa is changed when she becomes a Vampire not only into a brutal killer who eventually murders the woman she loves, but also into someone who is full of self loathing and constant inner torment. In the Hammer movies we would often barely focus on the female characters after they became Vampires. They’d just become sexy Vampires and they be disposed of and that was that.

Also in films such a Dracula AD 1972, and The Satanic Rites of Dracula where Van Helsing was a pillar of virtue he loved his grand daughter Jessica and did all he could to save her. Here however whilst Van Helsing is horrified at the idea of his daughter becoming the thing he hates most, he actually doesn’t care for her at all. Its more of a “I don’t want any member of my family becoming a Vampire because its humiliating” than out of any affection for his daughter.

Also whilst Dracula is normally portrayed as an alluring, powerful presence here he is a dying, pitiful character that Clarissa finds repugnant and is only able to trick her through pity more than anything else, as well as her own hatred of her father.

This is a brilliant Dracula story that completely deconstructs all of the classic tropes of the story whilst remaining true to its basic blueprint. You wouldn’t think anything new could be done with Dracula in 2012 but the writers of this series managed it with this strip.

Now in 2012 it was reported that there would be a film adaptation of School of the Damned. Sadly nothing has come of it since, but if there ever is a film or tv version of it then this is who I think should play some of the characters.

I think Capaldi would have the necessary moral strength, authority, charisma and certainly the right look to play Frankenstein. He has a real Peter Cushing look to him and I hope after he leaves Doctor Who he spends the rest of his career doing Peter Cushing type roles. Its about time someone did. Now please don’t take this the wrong way. I am not for one second saying Michelle Gomez is ugly. I would never make fun of anyone’s looks anyway and I certainly wouldn’t start with someone as beautiful as Michelle Gomez.

However having said that whilst she is a very good looking woman I think she is kind of like the late great Rik Mayall in that she is someone who can often make herself look hideous for a laugh.

Check out her deliciously grotesque performance as Margaret Thatcher to see what I mean. It doesn’t surprise me that Michelle Gomez a working class Scots woman who lived through the Poll tax gave us a lot less sympathetic (but much more accurate) portrayal of Thatcher than a Hollywood Bimbo like Meryl Streep!

Anyway with this in mind I am sure she could come up with an equally hideous and insane portrayal of Medusa that would be absolutely glorious and a joy to watch.

A great villain, and as seen with his excellent performance as Striker in X-Men 2 he could play  a fanatical xenophobic character like Van Helsing superbly.

Obviously one of my favourite actors, Carlyle I think would be quite good for the Vampire as he has quite a wirey build and is quite small. He also has a lot of gravitas a a performer and can act under heavy make up as seen with his role as rumplestiltskin brilliantly.

Based on her performance in Game of Thrones I think she could inject alot of pathos and character into this character. Also her proven chemistry with Capaldi would work to the benefit of the how too.

Thank you for reading

2 thoughts on “School of the Damned Review”