There are two reasons everyone goes to see Dinosaur or giant monster movies. To watch them eat people AND kick the shit out of each other. It might sound shallow but its true. That’s why Tyrannosaurus Rex is the most popular Dinosaur instead of that big lumbering harmless oaf Diplodocus.

In this article I have compiled what I feel to be the 10 most entertaining instances of giant monsters beating each other to a pulp.

The great thing about it is that its so unexpected. Throughout this episode the Future Predator has been made out to be the most dangerous creature the team has ever encountered. Its described by Helen Cutter as having an almost supernatural ability to stalk its prey. It eats lions for breakfast!

The Gorgonopid is an obsolete predator from the past, specifically from the Permian era before the time of the Dinosaurs that the team dealt with relatively easily in the first episode. They just rammed it with a truck and shot it a few times.

It truly is a spectacular sequence. It was the same team behind Walking with Dinosaurs that made this series so the effects are similarly top notch.

From the Ray Harryhausen masterpiece The 7th Voyage of Sinbad, there are shades of the Tyrannosaur vs Kong fight in this sequence, as we have the giant reptile vs the more human monster. Here however its the big reptile that wins in quite a nice reversal.

Even though the Dragon can use fire, it still crushes the Cyclops in its jaws. The Cyclops never stood a chance as the Dragon is said to prey on its kind. Even when the Dragon is chained up its still capable of eating a Cyclops, as the wizard uses it as a guard dog to protect his lair.

Another of Harryhausens finest moments. Everything about this scene is just amazing from the effects, to the beautiful scenery, to the stunning music.

Its actually quite rare in Dinosaur movies to see two huge flying reptiles battle it out.

Its not really a fight however. The Ramphorhynchus just slaughters the Pterodactyl and kicks it into the ocean before going on to eat its children! You go from being scared of the Pterodactyl to almost pitying it the way its just so outmatched by the other winged terror.

Even the Cyclops put up a better fight!

This scene went on to become one of the most iconic moments from any Dinosaur film. The image of the Pterodactyl holding Raquel Welch in its claws whilst battling another ravenous flying reptile is almost as iconic an image as Kong holding Fay Wray whilst fighting off a Tyrannosaurus Rex.

There have been homages to this fight in various other Dinosaur films such as most recently in Jurassic World where the lovely Katie McGrath after trying to protect two children exactly like Raquel Welch, is scooped up by a Pteranodon that then fights with another Pteranodon over her, only to then drop her in the water exactly like Raquel Welch. Katie however doesn’t have quite the same luck.

Katie’s death scene can be seen as a dark homage to this iconic sequence.

From Peter Jackson’s 2005 remake of the most famous monster movie. The V-Rex’s are said to be the descendants of Tyrannosaurus Rex itself. All the Dinosaurs in this film are fictional as the makers of the movie have said that if the Dinosaurs did survive in some remote area in the world, then they would have kept evolving into new forms.

According to spin off material the V-Rex’s have wiped out Kong’s whole species on the island. Peter Jackson even said that they killed his family. Kong therefore has a real personal hatred of the monsters and you can see it in the way he kills them all so viciously.

The only problem with the fight is that it does stretch credibility a bit much the way Anne is caught up in the fight and is completely unharmed. At one point Kong practically falls on her! It would have been better if Kong had put her down first, but its still a brilliant sequence.

From the Toho classic Destroy All Monsters. This film brought together most of their iconic monsters such as Baragorn, Manda, Anguirus, Mothra, Rodan and of course Godzilla himself.

The films plot sees a group of aliens called the Kilaaks brainwash all of earth’s monsters like Godzilla and Rodan and set them loose on humanity. After the humans manage to break their control over the earth Monsters,then they send King Ghidorah the space monster to kill them all.

One monster against 10 however? It doesn’t end well for Ghidorah and he gets beaten to death.

Sadly a lot of people look down on Godzilla movies because they are seen as cheap and silly, but the fights were always well done as they put a lot of effort and thought into them.

My favourite moment is when Anguirus a mutant Anklyosaurus bites Ghirodrah on the neck, and is actually carried through the air by Ghidorh before Ghidorah shakes him off and sends him tumbling to the ground. 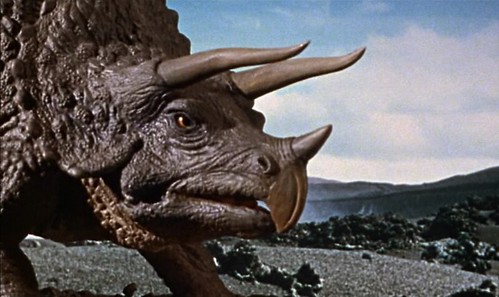 This is a truly thrilling sequence. I love the way we see the Triceratops’s horns literally dripping with blood after it gores the Ceratosaurus to death.

Gamera has fought Gyaos many times. Gyaos is his archenemy after all, but my favourite brawl between the two of them is in the 1995 movie Gamera Guardian of the Universe (in my opinion the strongest of all the Gamera movies).

This fight is really brutal in places like when Gyaos actually cuts his own leg off to escape the Turtle. The ending however when Gamera blows Gyaos to smithereens is one of the most spectacular monster deaths.

From Jurassic World the latest entry in the Jurassic Park franchise. Despite its massive success this movie tends to polarise opinion among the fans. Personally I thought it was a huge improvement on the third film, but still not quite up to the standard of the first two. Though as far as 4th entries in a series go I’d say it was well above average overall.

The Tyrannosaurus/Indominus fight is without doubt one of the best moments in any of the 4 films. Not only is it a spectacular sequence but it also brings the T-Rex back to the franchise with a bang.

I like most fans of the series hated the way they treated the T-Rex like crap in the third film. Not only is he my favourite Dinosaur, but he is the logo of the franchise.

So to see the female T-Rex from the first film show up to save the day was a brilliant way of making up for Jurassic Park 3. There is even a little take that to Jurassic Park 3 when the T-Rex smashes its way through a Spinosaurus skeleton.

Whilst it is a bit far fetched to have a T-Rex and a Velociraptor tag team against the I-Rex its still fantastic watching the two icons of Jurassic Park put the young upstart in her place.

Who would have thought you could have outrun a T-Rex in high heels? Remember in the first film when it almost outran a car? 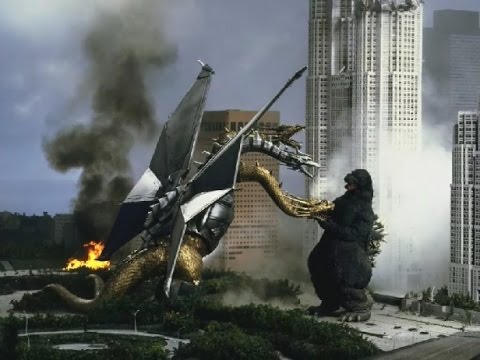 This list could have been nothing but fights from Godzilla movies, but obviously to give it a bit of variety I had to tone it down a bit to just a few.

To me this is the best one on one fight in the whole Godzilla series. Its from the 1990’s version of Godzilla vs King Ghidorah.

I always liked Mecha Ghidorah as he was really a combination of Godzilla’s two most dangerous foes King Ghidorah and Mecha Godzilla. He has all the great qualities of both, he can fire weapons from so many different parts of his body like Mecha Godilla such as when he shoots a grappling hook from his chest, but like Ghidorah he towers over Godzilla and even picks him up!

Godzilla is at his most relentless in this fight too the way he doesn’t give up and ultimately manages to destroy Mecha Ghidorah by himself which is pretty impressive when you consider that he normally needs help to beat the regular Ghidorah.

The first giant movie monster fight. The effects might not be quite as smooth as some of the modern classics but it still holds up.

What’s great about this fight is the way that the Rex and Kong are like two boxers fighting each other. Willis O’Brien who animated this sequence was a former boxer himself and he did actually base this fight on his own experiences.

There are traces of this fight in so many big monster brawls. The big reptile vs the more human monster, the human cowering in the corner, the tooth vs fist aspect.

To me its still the ultimate monster fight.