The final Dalek story of the 1960s. The Evil of the Daleks has a somewhat more surrealist, even whimsical aspect to it, though it would also set down many tropes and ideas that later Dalek stories (particularly those of Big Finish and the New Series) would use.

Sadly all but the second episode is missing from the archives though much like The Power of the Daleks its reputation is still high among Doctor Who fans. It was even voted the greatest Doctor Who story ever made in a poll taken for the 30th anniversary. 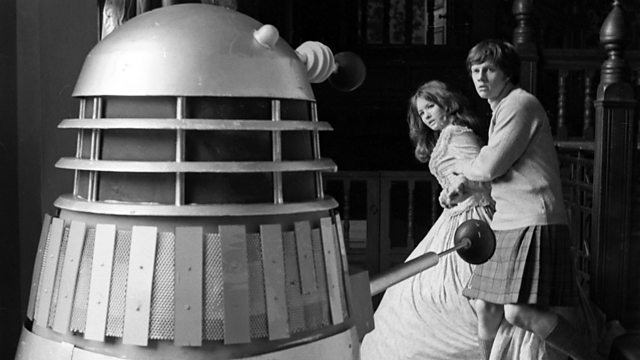 The Doctors TARDIS is stolen in London in 1966. The Doctor and his companion Jamie are able to track the perpetrator down, a man named Edward Waterfield who sells Victorian clocks.

At his shop they discover an advanced, seemingly alien machine at the back, as well as the dead body of a man named Kennedy who appears to have died in the most terrible agony.

Before the Doctor can investigate further however, he and Jamie are knocked out by gas and whisked away 100 years into the past by Waterfield.

There Waterfield reveals why he stole the TARDIS and what his plan is. Waterfield and his friend Maxtible were experimenting with time travel technology which eventually created a portal to another time and world, Skaro!

The Daleks arrived through the portal and captured Edward’s daughter, Victoria who they threatened to kill unless he helped to lure the Doctor into a trap by capturing his TARDIS.

The Daleks threaten to destroy the Doctors TARDIS unless he helps them with their latest experiment. The Daleks have always been defeated by human beings and believe that it is because of certain traits that human beings have. The Daleks call this “the human factor” and wish to isolate it from humans in experiments and transfer it into themselves.

With no other options the Doctor is forced to help the Daleks and even performs experiments on their human captives, Victoria and Jamie.

The Doctor eventually is able to isolate the human factor and transplant it into three Daleks. The Daleks develop human emotions, become happy, caring and even come to see the Doctor as their friend.

The Doctor gives the three Daleks names, Alpha, Beta and Omega. Whilst Edward Waterfield only serves the Daleks reluctantly, Maxtible is willingly working for them as they have promised him the secret of alchemy.

The Doctor plans to spread the human factor like a virus throughout the Dalek race in the hopes that it will lead to a civil war that will destroy them.

However his plan fails and he is captured by the Daleks and taken back to Skaro (along with Waterfield, Maxtible, Jamie and Victoria.) the Emperor reveals that he no longer wants the human factor. Considering the experiment a failure after Omega, Alpha and Beta became too compassionate. The Emperor instead wants the Doctor to implant the Dalek factor (which makes the Daleks evil, xenophobic, and ruthless) into the human race throughout all of history which will wiping humanity from existence.

Once again with no other options the Doctor is forced to help the Daleks. The Doctor is able to isolate the Dalek factor which the Daleks then transplant into Maxtible. Maxtible comes to think and behave exactly like a Dalek just as they hoped.

The Doctor however pretends to be loyal to the monsters and works against them from within. Freeing the three humanized Daleks, the Emperor becomes scared that the human factor will spread. The Doctor tells the Emperor to send all Daleks through the Dalek factor machine to which the Emperor agrees.

Unfortunately for the Daleks, the Doctor reprograms the machine to infect all of the Daleks who go through it with the human factor.

The humanized Daleks soon turn on the rest of their kind and a massive civil war erupts. The Doctor, Jamie and Victoria escape to the hills of Skaro where the TARDIS is. Sadly Edward Waterfield is killed whilst saving the Doctor from a Dalek. The Doctor promises Waterfield that he will look after his daughter.

As the city of the Daleks erupts in flames and the Emperor is seemingly exterminated, the Doctor comments to Jamie on how he believes he has seen the final end of the Daleks.

The Evil of the Daleks is overall deserving of its status as a classic story, but I do think its flawed somewhat, particularly when compared with the previous Troughton Dalek adventure.

The Evil of the Daleks was intended to be the final ever appearance of the monsters in Doctor Who, and whilst I am of course glad that it wasn’t, it would have been a brilliant send off for them if it did, and still serves as quite a good ending for the 60s Dalek stories.

Evil takes us deeper into the monsters psychology, as well as their society and how they function than any other before. We see their chain of command, the Emperor and how they deal with members of their kind who are different.

Before we have only ever seen the Daleks persecute other life forms, but showing them turn on and actually exterminate members of their own kind was a nice twist that made them seem even more horrifying. It also helped to explain why the Daleks were so uniform, and also helps to set up why the monsters are doomed for extinction as ultimately any race, or society, or belief system that can’t look inward and change when it has too will eventually stagnate and die.

The idea of a Dalek being infected with humanity is an interesting concept, and one which many later stories particularly in the revival, such as Dalek, Into the Dalek and Journey’s End would explore too. Though David Whitaker had explored the idea of a humanized Dalek in The One in A Million Dalek comic story much earlier, Evil marked the first time this idea was explored in the television series itself.

The creatures are also at their sneaky and manipulative best in this story too. We get to see them twist the minds of various people, good and evil over the course of the story. With Waterfield they can recognise that he would never help them willingly so they threaten to hurt the person he loves the most to get him to serve them. Maxtible however fulfils the Mavic Chen type role of being the devious, self serving human who thinks he can use the Daleks for his own ends, but they play on his greed instead.

The interactions between the Doctor and the Daleks are also particularly strong in this story. I think this adventure and Power of the Daleks really helped to shape the kind of Doctor Patrick Troughton ended up being.

When you look at other stories in season 4, Pat’s Doctor tends be a more lighter version of William Hartnell. A crazy old uncle/ grandfather type figure, fond of name dropping all of the famous people he has known throughout history.

However in these two stories we see the Second Doctor become a more manipulative and sly individual, often putting on a bumbling facade and even resorting to lying to his companions too.

This would carry over into stories like Tomb of the Cybermen, The Web of Fear and The War Games and really became the dominant characteristic of Troughton’s Doctor that would also in turn carry over into later Doctors too such as Sylvester McCoy and Matt Smith.

I don’t think the Second Doctors manipulative side however was ever more effective than it was against the Daleks. The Daleks were the only enemies who were a match for the Doctor, as they knew all of his tricks, and so he would often be forced to go the extra mile against the monsters.

You can see that in Evil the way the Doctor and the Daleks use everyone around them like pieces on a chessboard and are constantly trying to stay one step ahead of each other.

The supporting cast of the story is very strong too. John Bailey is excellent as Edward Waterfield, who is a truly tragic character,

Despite the bad things he does you never lose your sympathy for him as Bailey always gives the character a real gravitas, and I liked the way the character is able to find redemption at the end when he sacrifices himself to save the Doctor. The final scene where the Doctor promises the dying Waterfield that he will look after is very touching. Victoria Waterfield played by the late Deborah Watling also gets a strong start.

Some fans have knocked her character for not being strong enough, but personally I think this is unfair. After all how do you expect a young, pampered Victorian woman to react to being menaced by monsters?

I always thought Victoria had a more interesting backstory due to losing her father under such tragic circumstances. On the one hand the last few things he did such as kidnapping the Doctor, and even covering up the Daleks murder of Kennedy were terrible which made his loss even more painful for Victoria as we see in the next story Tomb of the Cybermen, but on the other he only did them out of love for Victoria, and in the end he did give his life for the Doctor, so there is at least that comfort for her.

I also loved her relationship with both the Doctor and Jamie. We got to see a softer side to both characters in the way they take such an instant liking to Victoria and become very protective of her.

I always thought that Victoria served as quite a good surrogate for Susan, whilst at the same time the Doctor would have been a surrogate for her father, (both eccentric, doddering old scientists obsessed with time travel.)

The sets and production values for this story are also among the best for any 60’s adventure. The Dalek Emperor is a truly spectacular prop and its destruction at the end of the story is a thrilling sequence as the monster pitifully begs its own subordinates to try and see reason and stop fighting or else the Dalek race will be destroyed.

In a way it reminds me of Davros later begging the Daleks for mercy in Genesis.

Despite these strengths however Evil is still let down by the fact that its just a bit too long. I think it drags when the Daleks make the Doctor perform their experiments. It picks up again when the main characters get to Skaro, but overall much like the first Dalek story it could definitely be an episode shorter.

Also some of the moments of comedy in the story are a bit too overt too like the infamous Dizzy Daleks.

Still overall The Evil of the Daleks is a classic, highly influential story and a great end to the 60’s Dalek saga.