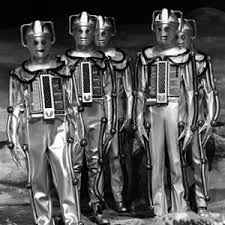 The second Cybermen adventure. The Moonbase also marked both a radical change of the Cybermen’s design and their characterisations, turning them into complete machine creatures.

It also marked the first of 4 Cybermen stories throughout the Second Doctors era.

The TARDIS lands in the year 2070 on the Moon. Using spacesuits, the Doctor and his three companions, Jamie, Ben and Polly explore the Moon, but whilst they play around in the low gravity, Jamie is injured.

Jamie is found by people from a nearby Moonbase who take him in for treatment. The TARDIS crew soon follow Jamie into the base and learn that the Moonbase controls the weather of the earth, using a machine called a Gravitron.

Unfortunately however the base is suffering from problems. A plague has infected various members of staff, which has made it more difficult to control the Gravitron. Whilst Jamie is in the sick bay, Polly spots a Cyberman abducting one of the patients next to him, suffering from the plague.

Hobson, the leader of the international team aboard the Moonbase, dismisses Polly’s claims believing the Cybermen were all killed when Mondas blew up in the 1980s. Hobson also gives the Doctor 24 hours to figure out the cause of the disease or else he will be forced to  leave the Moon.

Using fire extinguishers, nail varnish remover and other substances that dissolve plastic mixed together, Ben, Polly and a recovered Jamie are able to fight back against the Cybermen, but the monsters soon send a second army to attack the base. The Doctor however is able to best the Cybermen by using the Gravitron itself to send them back into space.

The Moonbase is a somewhat overlooked adventure. Its not surprising in a way as on the surface it is just another Troughton era, base under siege story. That plus that fact that two episodes were missing meant that it naturally wouldn’t have that much appeal to contemporary audiences. (Though both missing episodes were recently animated.)

A common criticism of The Moonbase is that it is just a remake of The Tenth Planet. Personally I find this claim to be somewhat hollow. Yes they both involve monsters attacking a base, but again so do many classic Troughton era stories from The Ice Warriors, to The Web of Fear, to The Seeds of Death. (I might add that The Moonbase predates all of these adventures.)

Other than the base under siege formula however, there are no real similarities between The Moonbase and The Tenth Planet.

The Cybermen are portrayed very differently across both stories. In The Moonbase we see a more clever, sneaky side to the monsters the way they divide and conquer the base using a plague. The idea of the Cybermen being desperate after the destruction of Mondas is also a nice contrast with The Tenth Planet too. In The Tenth Planet the monsters were a strong invading force, far in advance of us, who had armies capable of overrunning every military base and city on earth. Here however they are forced to skulk in the shadows, resort to sneak attacks, and ironically use humanity’s own technology against them.

This would help set the tone for future Cyberman stories where the monsters were shown to be nearing extinction. Personally I liked this idea as it helped set them apart from the Daleks in many ways.

The Daleks were a vast empire across the universe with countless resources and servants, whilst the Cybermen were once a great power desperately struggling to reclaim their former glory. In a way the Cybermen were more sympathetic as all they wanted was to survive, but sadly that has to come at our expense, as the only they can reproduce is to convert us!

The Daleks don’t need to invade. They do so out of pure malice, whilst the Cybermen in contrast make it very clear in The Moonbase that they are disposing of humanity, not for revenge or hatred, but simply to eliminate a potential threat. In this respect we don’t really have the moral high ground against the Cybermen. With the Daleks is more black and white. They are the badguys who want to kill everybody, but ultimately the Cybermen are behaving no differently than we would in this story.

Sadly the two races can never go exist, as the Cybermen essentially have to prey on us, so they are just trying to get rid of us before we get rid of them.

The redesign of the Cybermen for this story is more than just a superficial difference. Here the Cybermen are made completely mechanical. In The Tenth Planet not only did they still have some organic parts (like human hands) but they also still appeared to have individual names and identities. Here however they are all machine like drones.

The original Cybermen did look somewhat more vulnerable because there were still some organic parts that looked like potential weak points. You could imagine in a fight being able to make them bleed, or hurt them by pulling out the various wires on their bodies.

The Moonbase Cybermen in contrast however are a mountain of steel that you’d probably break your hand off of if you tried to hit! There is no way you could even defend yourself against one if it cornered you.

The story takes full advantage of this in various scenes such as when the Cybermen brutally beat two workers to death, or when Cyberman corners Jamie in the sick bed, which is undoubtedly one of the tightest, most claustrophobic moments in 60s Who. Here we have one of our main characters, who even if healthy couldn’t possibly fight off this monster, trapped completely helpless as it looms over him. The Cybermen’s blank face and total silence also helps to heighten the terror, as you have no idea what is going on in its head. Again in contrast to the Daleks who would always shout their intentions “EXTERMINATE, DO NOT MOVE, DO NOT MOVE, SEEK LOCATE DESTROY!” The Cybermen in this story barely utter a word and are actually all the more sinister for it.

In many ways The Moonbase is the story that would help to establish the Cybermen’s identity to viewers and fans for decades to come. Certainly most Classic era Cybermen stories seem to follow their portrayal in this adventure at least, as more mechanical, desperate creatures, working through infiltration and simply trying to survive.

Aside from the Cybermen themselves, the story holds up in most other respects. The sets are well designed, the direction is tight and atmospheric, and the guest cast is particularly strong.

The regulars, Ben, Polly, Jamie and the Doctor are also on top form here. Though Jamie is somewhat sidelined for part of the story, the four nevertheless make an effective team against the Cybermen for the second part. (Considering Jamie had to be included at the last minute, I think the writers got round the problem rather well by not only making him part of the action, but also using his injury to build up the threat of the Cybermen stealing patients.)

Patrick Troughton delivers a solid performance, though I think at this stage, Troughton hasn’t really worked out his own Doctor’s personality in quite the way he would later.

In these early Troughton serials he is very much just a younger, friendlier Hartnell. He’s more Holmesian, deadly serious, constantly consults his 500 year diary etc. The more clownish facade that he’d use to throw his enemies, that really defines his character starts to appear in later adventures towards the end of his first season.

Still in some respects his more subdued performance here helps to sell the threat of the Cybermen better, such as his memorable delivery of the line “Some corners of the universe have bred the most terrible things.”

Overall whilst The Moonbase is not one of the all time greatest Doctor Who stories, much like The Tenth Planet I’d say that its a minor classic. Its a well written, well directed, well made, tight, scary story that also manages to develop the Cybermen and set the standard for the monsters portrayal for decades to come.