Below is a list of arguably the most prominent appearances by Tyrannosaurus in the video game medium. 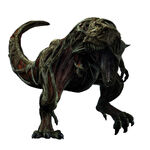 Still since it doesn’t really properly appear in Dino Crisis 3 I will not be looking at it here.

Tyrannosaurus is encountered fleetingly throughout the first entry in the series. Whenever it does appear however it is completely unkillable except for during the final battle.  It can also swallow the main protagonist Regina whole with a single bite. Often the best thing to do whenever you see it is just to get the fuck out of there. It can however in some encounters be driven off with grenades such as when you first encounter it crashing through the window of an office.

The T. rex will often just pop up completely at random and without warning. I always loved that as it made the game much more tense for me that at any moment this large unstoppable behemoth could suddenly just come crashing out of nowhere. Maybe you’d be out in the open and suddenly you’d hear a rumbling and then it would be there, or maybe just its head would come smashing through a window without warning. It definitely kept the player on edge in a good way.

The T. rex is ultimately the final boss in the game, but depending on how you play it can be defeated in a number of different ways. In one possible ending the Tyrannosaurus is actually shown to swim after Regina it is so determined. The Tyrannosaurus is fixated on hunting Regina throughout the entire game. You could compare it to Sharptooth in the first Land Before Time Movie in that in both cases the T. rex really has no reason to chase the main heroes, as they’d be nothing more than one bite to it and there are dozens of larger Dinosaurs it could attack and kill.

The for want of a better word relationship between the T. rex and Regina is like a reverse Ahab/Moby Dick. Here it is the big bloody awful animal with huge teeth is obsessed with killing the human and is ultimately destroyed by its quest.

Regina’s many encounters with her most fervent admirer.

What happens if the player isn’t careful.

In Dino Crisis 2 Tyrannosaurus only appears in two sequences. It battles the character of Dylan both times. I guess Regina had had her fill of T. rex attacks in the first game. The T. rex in this game is given an actual motivation for wanting our heroes dead. In the opening cutscene its eye is blown out by David a friend of Regina and Dylan.

Unlike the Rex in the first game this one wasn’t just mean for the sake of it.

My favourite moment is when the T. rex fights Dylan in a Tank. Believe it or not this scene isn’t so far fetched as a real Tyrannosaurus Rex’s bite force would have easily been strong enough to bite through the armour of a tank no problem.

Just like in the first game the T. rex cannot be killed whenever you face it, it can barely be slowed down. You have to flee both times you encounter it. However it can not swallow you whole in this game, instead it just rips you apart.

Ultimately the T. rex is not the main villain of the game. When it shows up in the last level it is replaced by a Giganotosaurus.

Though Giganotosaurus was larger than Tyrannosaurus in real life this game obviously exaggerates the size and power of Giganotosaurus. Not that it matters of course as its still an awesome scene. What I love about it is that it feels almost comical the way the T. rex has been chasing you the whole game and then all of a sudden completely out of nowhere, a larger Dinosaur just shows up and steals the limelight.

Dino Crisis 2 is easily one of my favourite video games. In fact I’d say that it is possibly the greatest Dinosaur game ever made. My only problem with it however is that I feel the T. rex is used perhaps a bit too sparingly. You never get the feeling that it could be around every corner like the first game, because it only pops up twice. I think they should have maybe stuck in one more T. rex fight scene. 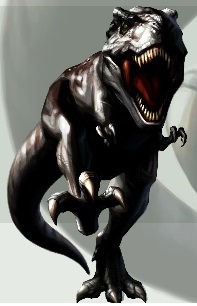 This sequel to Dino Crisis 2 featured Tyrannosaurus once again as the main villain. Tyrannosaurus first appears where it kills two Carnotaurus, who much like the Rex normally does in the other games had been chasing you throughout the whole game. The Rex also appears in the final battle where you kill it by knocking the Dinosaur into lava.

Overall this game is not as strong as the previous two. Its a decent shoot em up and the graphics for the time are pretty good. It’s also great seeing Tyrannosaurus restored to its position as the main villain, but still it’s sad that the Dino Crisis franchise had to bow out on this fairly average game.

Naturally being the logo of the franchise Tyrannosaurus has appeared in every game based upon the Jurassic Park film series.

I think that probably my favourite appearance by Tyrannosaurus in a Jurassic Park video game is in tell tale’s Jurassic Park the game. This game was actually intended to be a sequel to the first film. It would later be contradicted by Jurassic World as the end of this game states that Isla Nublar, the setting of the first movie was bombed, killing all of the Dinosaurs there. However in Jurassic World the T. rex is said to be the same one from the first film.

The best thing about the T. rex in this game is the way it kills you. The Deaths are always so elaborate. It crushes your skull between two huge crates, crushes you under cars. At times its more fun letting your character die just to see what happens.

And you thought Regina got it bad!

Tyrannosaurus appears in this game. It is the most powerful Dinosaur in the game. Considerably more so than the Spinosaurus which it kills in the trailer effortlessly. It is both a playable character and an enemy. It has the ability to swallow human beings completely which will regain your health if you are playing as the Tyrannosaurus.

Tyrannosaurus has appeared a few times in this long running franchise though only ever as a supporting character.

A Tyrannosaurus named Thunder appears as the penultimate boss that Turok battles. It is the pet of the main villain of the game. What makes this a particularly cool T-Rex fight is that it as you can see it part robot. It has a robot laser eye and can breath fire!

Only thing better than a T. rex? A T. rex with laser beams attached to its fricking head.

Tyrannosaurus appeared in a few cameos in this entry of the series. In one level you will encounter a Tyrannosaurus that is feasting on a sauropod it just killed. The Rex will notice you and chase you. Though it may also kill some villains that are chasing you, it’s best to take care of this Rex as quickly as possible.

The main villain of the game Bruckner rides a Tyrannosaurus at the end. Unfortunately Bruckner is widely regarded as one of the worst video game villains of all time.

There were even the Tobais Bruckner awards in Electronic Gaming Monthly which awarded the very worst in video games, characters, levels, etc named after the character.

A large female Tyrannosaurus named Mama Scarface appears in the latest entry of the series. She is far larger than any real life Tyrannosaurus or indeed any real life theropod. She is the most powerful Dinosaur in the game and will chase the player through multiple levels. Sadly other than her size there is not much notable about this Tyrannosaurus.

Yeah that’s cool, but does it have a laser eye?

In this video game adaptation of Jacksons movie, the V-Rex which is a descendant of the Tyrannosaurus Rex appears as a frequent antagonist. When you play as Kong you can fight it, but as Jack it is completely and utterly unkillable and will kill you in a single bite.

I think my favourite T or V-Rex level is when it knocks Kong off of a cliff and you have to as Jack rescue Ann armed only with a spear or an old Raptor bone from the V-Rex. I wish this scene had been in the film

Turns out Adrien Brody isn’t as good at fighting T-Rex’s as as a 25 foot gorilla is.

Join me tomorrow when I look at T.rex’s appearances in comic books