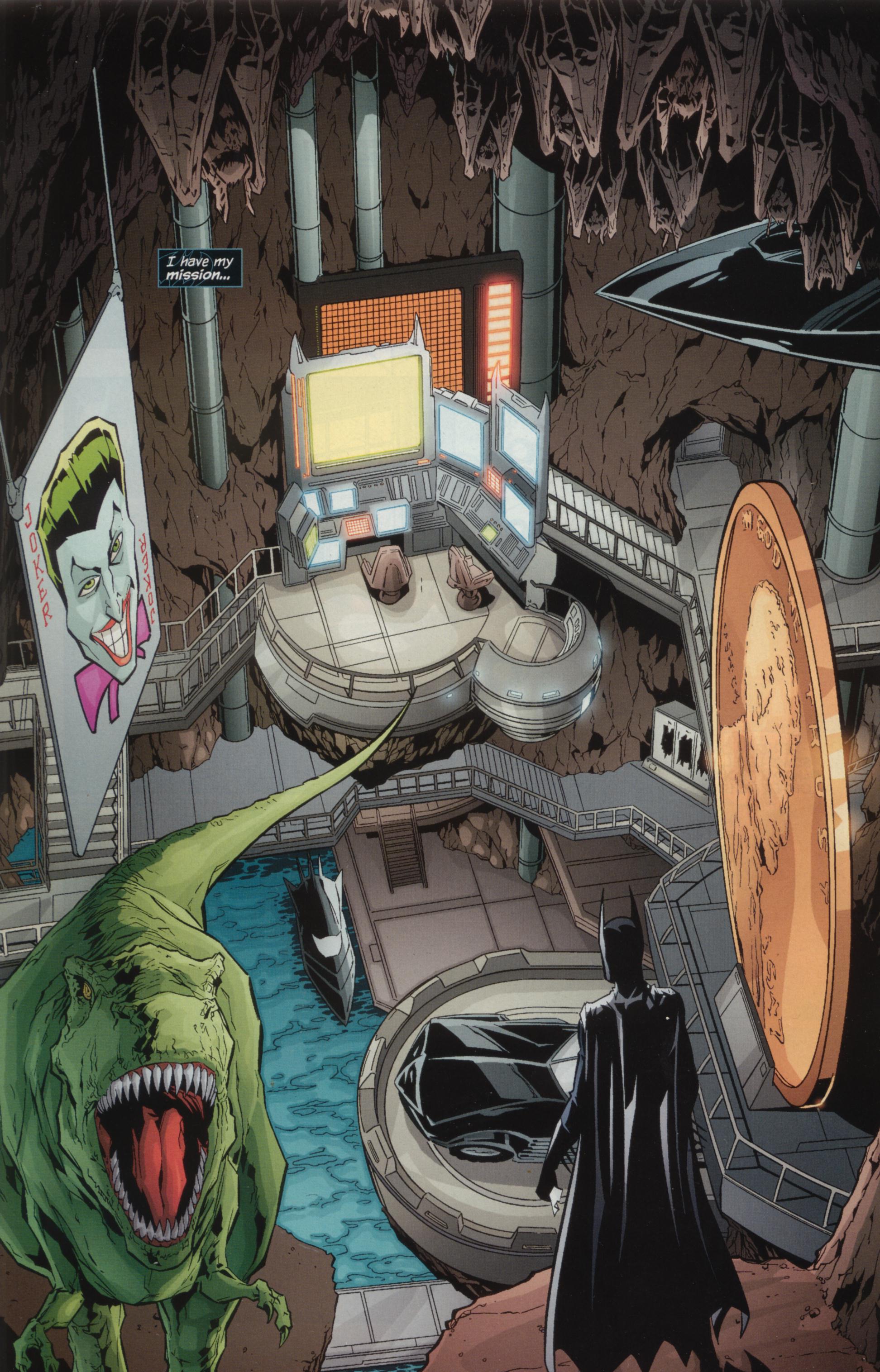 Tyrannosaurus Rex has appeared in many comic books over the years. Though it is often portrayed as a villain like in most other forms of media. A few comic books have nevertheless given it a more starring, even sometimes heroic role.

This marvel comic book series was created by Jack “King” Kirby in the late 1970’s. Though it only ran for 9 issues it has developed a considerable cult following. In fact when Jack Kirby passed away the character of his that most artists wanted to draw was Devil.

The series was originally set in earth’s past. Kirby stated that just when the last of the Dinosaurs died out and when the first humans emerged is still shrouded in mystery. Later writers however retcon it so that Devil’s adventures take place on a parallel earth where the Dinosaurs did not die out, but human beings and mammals still evolved.

Devil Dinosaur revolves around a bright red Tyrannosaurus Rex named Devil, who is attacked as a child by a group of savage ape men who also murder his mother and siblings. Devil himself is burned, but he nevertheless is rescued by an ape man named Moon Boy. Sadly Moon Boy is rejected by the rest of his tribe for befriending a T. rex (which are referred to as Devil beasts).

Devil whose skin was turned bright red by being burned and Moon boy travel the world together helping people.

Over the course of the 9 issues Devil would battle the savage ape men who killed his family and their evil Spider god, Giant’s, huge killer Ants and even aliens from another planet! The final issue see’s Devil battle a witch who sends him through time to modern day where he goes on the rampage.

After the end of Devil Dinosaur the character would go on to appear in numerous other Marvel series in guest roles, though he has sadly never had his own ongoing series since. Later comics would see Devil and Moon Boy eventually be transported to our earth where they would become trapped.

One notable guest appearance from Devil saw him team up with Godzilla when the latter was transported by accident to Devil’s earth where he would help him battle an army of Dinosaurs and killer ape men.

All 9 issues of Devil Dinosaur would later be collected in an omnibus edition. I would definitely recommend you pick up it up. The artwork is obviously fantastic. It is Jack Kirby after all, but I think its the fact that it has such a wild premise that of an Ape boy and his T.rex best friend fighting aliens, and time travelling witches that really makes it stand out as something of an overlooked gem.

Other Marvel and DC Comics Tyrannosaurus Rex has at some point battled most of DC and Marvel’s most famous heroes.

Batman encountered a gigantic robotic T. rex in Batman 35. It was part of a giant amusement park that featured giant mechanical Dinosaurs that were taken control of by one of Batman’s enemies. After defeating the villain Batman decides to keep the Tyrannosaurus as a trophy. The T. rex has gone on to become one of the most iconic trophies in the Bat cave alongside a giant penny and a giant Joker playing cared taken from an adventure with…. well does it really need saying? 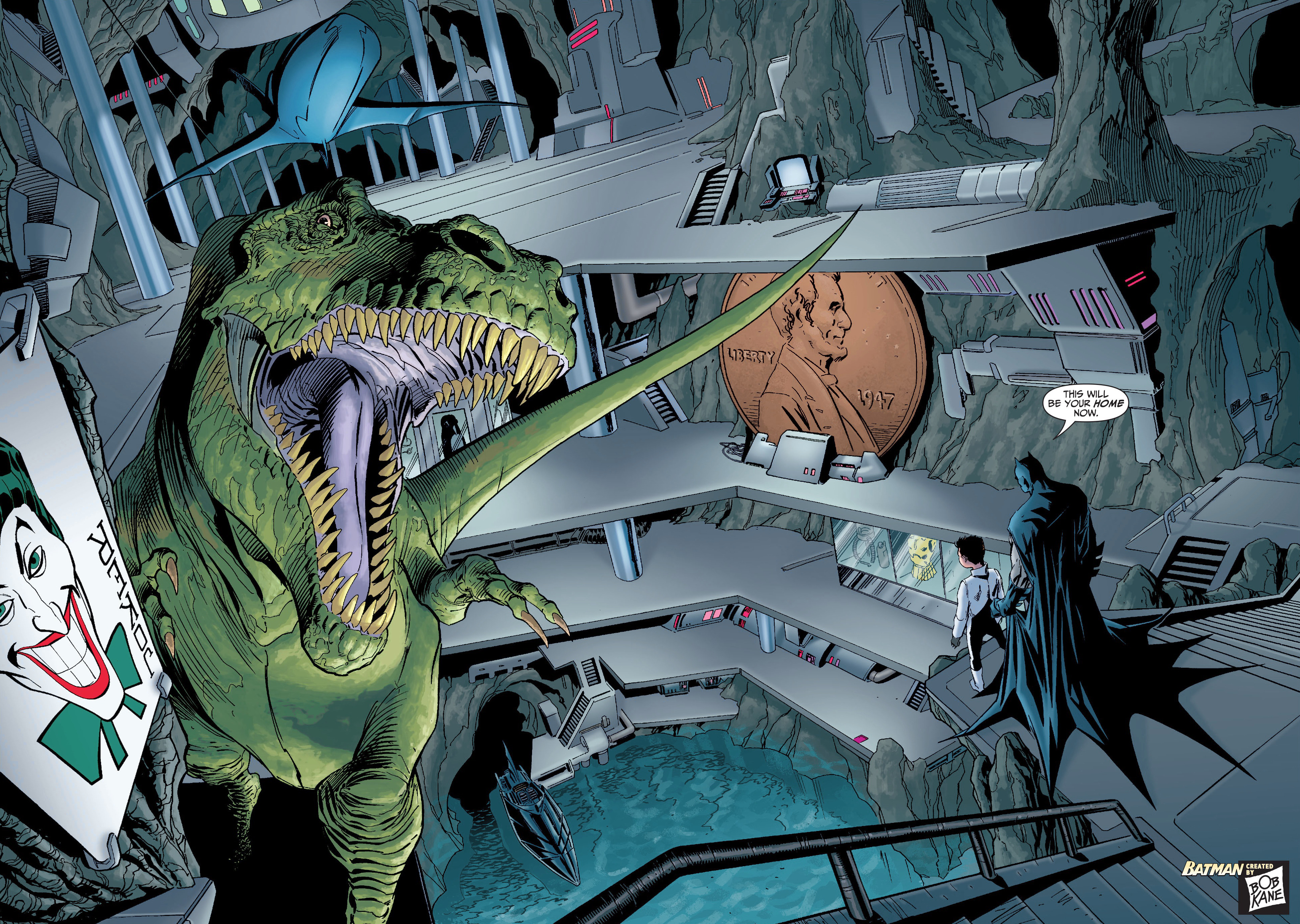 In one issue Batman was actually able to bring the Tyrannosaurus Rex to life and use it to defeat someone who had infiltrated the cave. Apparently the T. rex’s name is Fido!

The T. rex has appeared in numerous animated adaptations of Batman too such as in the DC animated universe. I would like to see it appear in at least one live action version of Batman however. Hopefully it will appear in the upcoming Batman vs Superman movie.

T. rex’s are also shown to live on the Savage Land in Marvel Comics a tropical lost world that exists within Antarctica. The Savage land has been featured prominently in many story arcs of the Uncanny X-Men series which has lead to a few encounters between the mutants and the Tyrant Lizard king.

T. rex’s are also shown to live on DC Comics lost world simply titled Dinosaur Land. Dinosaur Land was often featured in Star Spangled War stories which were later collected in an omnibus edition as The War That Time Forgot.

Tyrannosaurus was once again obviously featured prominently in this series too and even appeared on the cover of The War That Time Forgot. 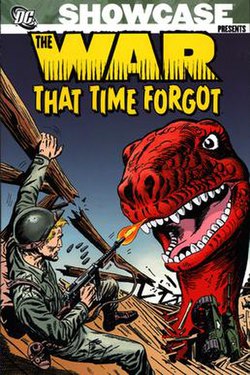 One of Judge Dredd’s archenemies is a cloned Tyrannosaurus Rex named Satanus. Satanus’s most prominent appearances are in the Blood of Satanus trilogy and Satanus unchained!. Satanus was cloned for the Dinosaur national park, but after the atomic wars he managed to escape.

Later issues would introduce both his mother Old One Eye and his son Golgotha.

Its interesting to note that the idea of Dinosaur National Park pre-dated Jurassic Park by about 12 years.

Angel After the Fall 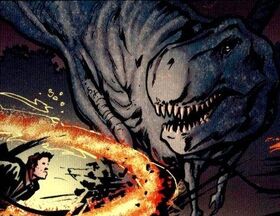 A gigantic Demonic Tyrannosaurus Rex named Kenny appears in this comic book series which is based on and is apparently canon to Angel, the spin off from Buffy the Vampire Slayer. The T. rex is chosen by the Demon lords of Los Angeles as one of their champions to battle Angel. In a humorous moment Angel asks the Tyrannosaur if it much like his pet Dragon is a good guy duped into working for an evil Demon, only for the T. rex to ask him if he is high.

This family friendly comic book series created by the Walking Dead creator Robert Kirkman features a Tyrannosaurus as the main character. The premise revolves around two Scientists discovering another world under the ground where Dinosaurs still roam.

One of the scientists  Maximus genetically alters a Tyrannosaurus Rex to serve as the prototype to a new super army of Dinosaurs with which he can use to conquer the earth. Unfortunately for him the Tyrannosaurus soon turns on him and helps his archenemy Derek Dynamo and his son to thwart his various evil schemes.

The comic has proven very popular, so much so that Kirkman has even talked about adapting into either film or television.