Allosaurus was the lion of the Jurassic. Though it was much smaller than the likes of say Tyrannosaurus Rex, it was still the largest predator in its environment and preyed upon some of the mightiest animals ever to live on the planet such as the gigantic Sauropods.

At one point it was one of the most famous of Dinosaurs, but sadly in recent decades it has been somewhat usurped in popular culture by other giant killers such as Giganotosaurus and Spinosaurus.

Still we know more about Allosaurus than most other Dinosaurs as there have been considerably more skeletons discovered of the beast over the years than the majority of other Dinosaur species. 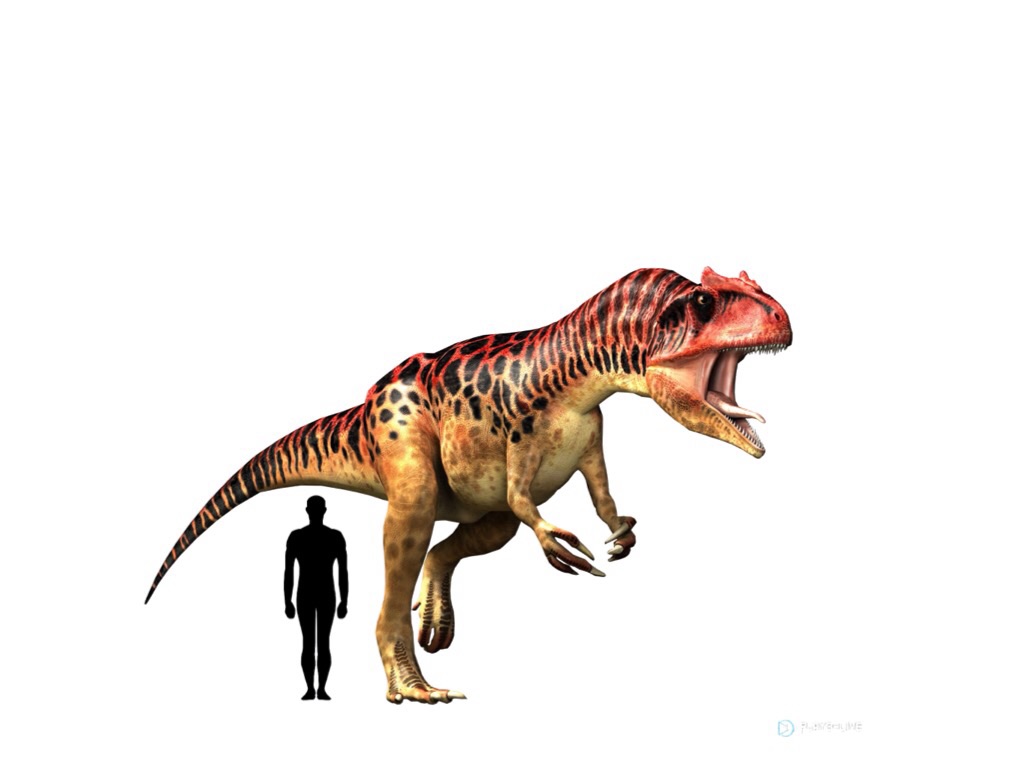 Allosaurus was a medium (by Dinosaur standards) sized carnivore. It could reach a maximum length of 39 feet long, with a height of 13 feet and a weight of 2 tons.

Allosaurus lived during the Jurassic period 150 million years ago. It belonged to a group of large meat eating Dinosaurs called the Allosaurs who flourished throughout the Jurassic period and the early to middle Cretaceous. They also included Giganotosaurus and Carcharodontosaurus two of the largest meat eating dinosaurs of all time.

Allosaurus lived alongside other giant predators such as Ceratosaurs with the two occupying different niches to one another. It is believed that Ceratosaurus may have been a pescovore. Allosaurus also lived alongside giant herbivores such as Diplodocus, Apatosaurus and Stegosaurus, all of which it may have preyed on.

Allosaurus was first discovered during the middle of the bone wars in the late 19th century. The first bone fragments were found in the year 1869, but it was not named until the year 1877. It was called Allosaurus Fragilis by Othneil Marsh which means Odd or different lizard.

It was originally thought that female Allosaurus’s were larger and more powerful than the males, but the evidence for this is no longer considered valid. Now no one knows whether the males or female were larger for any species of Dinosaur. It is possible that males may have been larger like most modern day reptiles and birds the living relatives of the Dinosaurs, or its possible that like modern raptors (birds of prey) the females may have been bigger.

Scans of its brain case reveal that its brain was virtually identical to that of a modern day Alligator meaning that it most likely would have behaved in a similar fashion and had similar levels of intelligence. Alligators have a higher level of intelligence than certain species of cats and dogs and therefore Allosaurus most likely would have too.

How Did Allosaurus Kill Its Prey?

Allosaurus was most certainly a predator. There are several pieces of direct evidence for this. A stegosaurus skeleton has been found with an Allosaurus bite mark on one of its plates that has healed, whilst at the same time another Allosaurus skeleton has been found with slash marks from a Stegosaurus tail that have similarly healed. There have also been footprints discovered made by a large sauropod Dinosaur with the footprints of an Allosaurus following behind.

Several other Allosaurus specimens have been found with broken bones and gruesome injuries that have clearly been gained in conflicts too.

Whilst some may dismiss these as rare occurrences its important to remember that given how rare the fossil record actually is this seems unlikely. In order for so many cases of active predation by Allosaurus on other animals to be preserved it would have to be happening fairly regularly.

Despite its size however, Allosaurus is believed to have had among the weakest bite forces of any meat eating Dinosaur.

The reason for this was because Allosaurus didn’t need a massive bite. Instead it would open its jaws much wider than that of most other meat eater, and then swing its head like a hatchet at its victims allowing it to cleave off huge pieces of meat. In order to do this more effectively Allosaurus skull was also much stronger and more reinforced than those of other predators too.

Allosaurus could open its mouth even wider than T. rex.

Allosaurus was also among the fastest of all the large meat eating Dinosaurs. Allosaurus could run at 35 miles per hour. This is almost four times as fast as an African Elephant.

Finally as if that wasn’t enough Allosaurus also was very strong and durable. They could survive injuries that would have killed other animals. One specimen, a sub adult nick named big Al had 18 major injuries including smashed ribs almost all of which had healed.

All of these factors made Allosaurus a very effective predator of some of the largest animals ever to live on the planet. 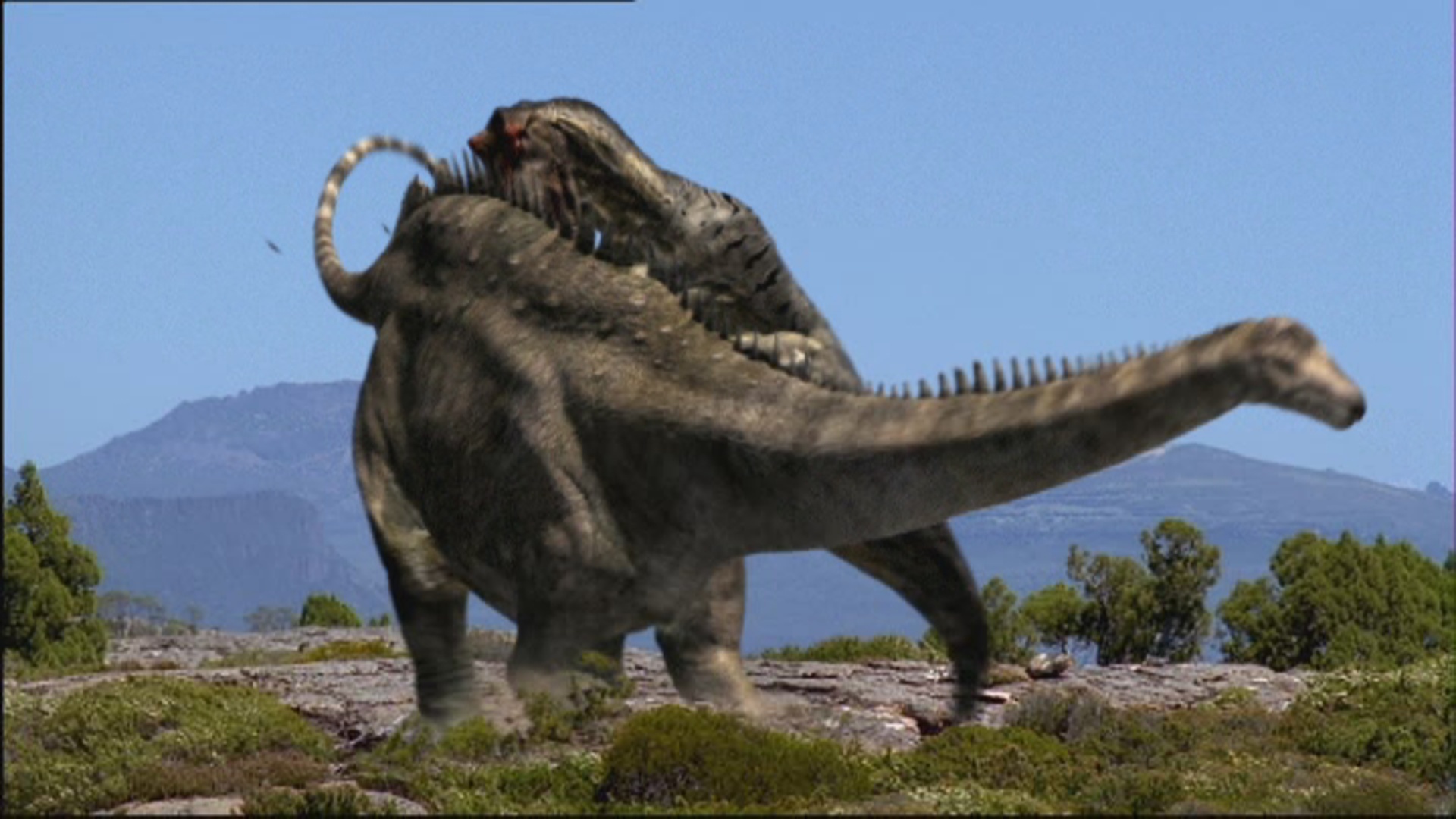 There is also a possibility that Allosaurus may have swarmed their prey in groups too. Contrary to popular belief, they most likely would not have hunted in coordinated packs like wolves, as such behaviour is not known among Archosaus. Still swarming behaviour is certainly possible, and Allosaurs may very well have been social animals too. There have been many Allosaurus specimens that have been found together, but all this proves is that they died together for now.

One thought on “Dinosaur Spotlight 3: Allosaurus”