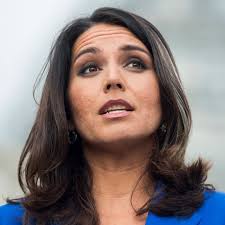 In this article I am going to run through the reasons as to why Tulsi in my opinion would be the best US President of the last 50 years. As always the opinions expressed here are solely my own.

Tulsi is the perfect candidate for me first and foremost because she is anti regime change. The main reason I wanted Donald Trump to win over Hillary Clinton was because Trump was at that point opposed to US intervention in other countries such as Syria.

Hillary Clinton was quite possibly the biggest war monger in US politics (and that’s saying a lot.) She voted in favour of the war in Iraq, a potential war in Iran, played key roles in destabalising both Honduras and Libya, and wanted to topple President Bashir Al Assad.

Pilger has done more to expose the true horrors of American interventionism in other countries than anyone else, having produced extensive documentary’s on countries the US has devastated such as Vietnam, Iraq, Chile, and Cambodia. Yet he of all people urged Americans to vote for Trump because of his stance on foreign intervention.

It’s also worth noting that a lot of Trump’s right wing supporters such as Info Wars pushed Hillary Clinton’s atrocious war record as the main reason not to vote for her. It’s not often that you see the likes of Alex Jones and John Pilger, or Paul Joseph Watson and Abby Martin saying the exact same things!

Face facts. Americans are fed up of money, resources and countless young men’s lives being wasted on pointless wars that are designed to benefit only those at the very top. They are fed up of more time being spent dismantling other countries governments, whilst America itself is an absolute shithole.

Americans are also fed up of the disgusting hypocrisy of their leaders who tell their people that their country has a moral right to dispose of the likes of Gaddaffi and Assad, whilst sucking up to the likes of Saudi Arabia.

Finally most Americans are also fed up of their country being hated by the rest of the world. Their government has invaded over 30 countries since the end of World War 2, is in bed with the most twisted nation of earth, and is generally seen as an evil, imperialistic force in the world.

Overall I still think he was the better choice than Hillary. The problem with Trump however. For all his base love to call him an alpha male, is that he is actually quite weak and easily manipulated. I feel he has been pushed into a lot of his worst foreign policy blunders by the war hawks around him. I also think that he is desperate to win favour with the mainstream media, (who have in all fairness put far more pressure on Trump than practically all Presidents of the past 50 years combined!)

As a result of the left’s actions. More and more people are turning against left wing politics. The next generation after millennials, Generation Z are said to be the most conservative since World War 2.

It’s great that young people are waking up to how toxic the regressive left is, but sadly I feel that the next generation, (if the polls are to be believed,) may very well end up going too much the other way.

The only one of the mainstream media’s complaints against Tulsi that holds any water is her record on LGBT issues. Until 2012, Tulsi was opposed to gay marriage, but she has since changed her stance, and has even apologised to the LGBT community for her previous views. The same was true of Hillary Clinton as well who was opposed to gay marriage for many years too, though oddly enough the regressive left didn’t see that as an issue in Hillary’s case?

Ultimately Tulsi Gabbard for me would be the best choice for President as she would do all of the things Trump promised to do, like focus on America first. Stop the American government from launching illegal invasions of other countries on flimsy moral reasons, whilst sucking up to Saudi Arabia, and give the mainstream media another kicking. At the same time, however unlike Trump, Tulsi would also support genuinely left wing ideas like Universal healthcare and bring some much needed credibility back to left wing politics.

To be fair to Trump, given how corrupt the system is. Tulsi could always end up being pressured into going back on her promises too. I don’t think she would, but ultimately you can never say for sure.

Still in the here and now, just as Trump was the better candidate than Hillary in 2016. Then Tulsi for me is the best Presidential candidate in 2019, and I will do everything I can to promote and support her campaign, and you should too.